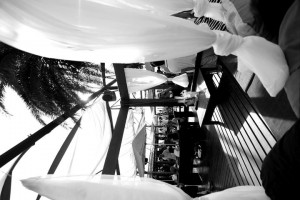 The Double Seven, Florianopolis is the sister project of the original Double Seven in New York.  Due to my experience with and knowledge of the concept, the Brazil partners wanted me to supervise the initial design, layout, and operational procedures.

I had the opportunity to work with the architect from the beginning to choose design items and finishes and craft the overall layout of the venue.  The goal of all of my interactions was to make the Brazil location as close to the operational efficiency that we achieved in New York as possible.

I worked directly with the chef to create the kitchen layout, and planned both the seating and point-of-sale layouts to create both the atmosphere and efficiency that the partners were looking for by bringing me on board.  There were many concepts for both BOH and FOH design that were “new” to the status quo of operations in this region, but the ideas were well received.

The high-end handcrafted cocktail program that we implemented had never been done before in Brazil – requiring us to source more than half of the bar equipment from another continent.  Extensive staff training was undertaken to allow the team to fully understand how the design and layout would help them maximize quality product and sales.

It was also of the utmost importance that, as a direct reflection of the original The Double Seven, the Brazil location maintain the same level of precise procedures that gave us success in New York.  Again, a lot of these policies were new to the area and I worked with a translator to be sure that the message and “spirit” of The Double Seven, New York was delivered to the team and eventually, the clients.